Having been at such a marvellous hotel previously the hotel in Beijing was disappointing. Apparently the tour had upgraded the old hotel to this one due to complaints so I wouldn’t like to know what its predecessor was like.

Just before 6AM we were woken by a clock chiming outside. It was a long tune that really couldn’t be ignored. Oddly enough, I tried to record it but the recording came out really quiet, which was surprising.

The quality of the food for breakfast wasn’t great either; many of the hot items were cold, the cereal (which I don’t have for breakfast anyway) was the only thing left in its containers between days and even the fruit seemed old and not particularly sweet or juicy.

On the bright side we were off to see the Forbidden City first thing in the morning. Sisi (pronounced “see see”, as one word) was the name of our specialist for Beijing and she was obviously full of knowledge of history most prominent to Beijing.

Outside, on the way to the Forbidden City we saw the outside of the National Museum of China and, opposite, the Great Hall of the People, where they were hosting the National People’s Congress (which, incidentally, is every March, the frequency of which we didn’t know at the time).

Inside the Forbidden City (of the details that I recalled – there was a lot of history cited to us) we learned that the maximum allowed height of the buildings allowed by emperor (don’t quote me on which one(s)) had to be lower than the tallest buildings within the Forbidden City. This is also why no trees were planted. If you had a building taller than the Forbidden City you’d have your head cut off. Similarly, wearing yellow would get your head lopped off as it was the emperor’s colour.

We were also advised that the decor is also re-painted every few years (such as for the Olympics) so that it’s more vivid. 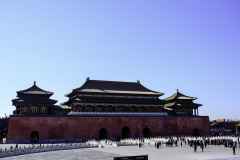 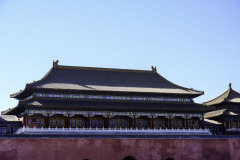 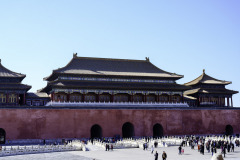 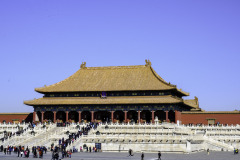 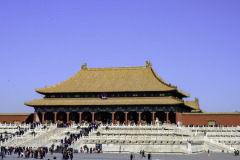 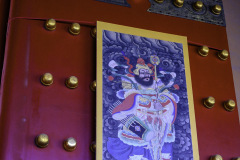 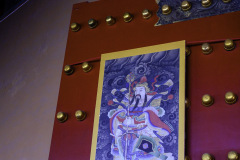 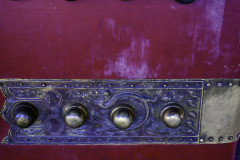 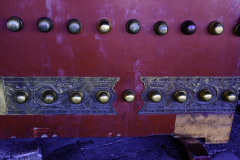 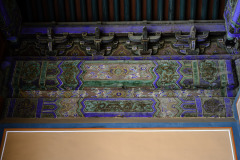 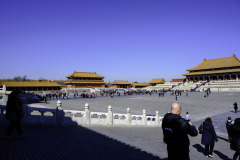 The large bowls dotted around the city are actually water pots, rather than plant pots. They were used in an emergency if any of the buildings – many of which were made out of wood – caught on fire.
At the front the largest of the three doors was exclusively for the emperor. Even his wife wasn’t allowed through, except for the single time in her life – their wedding day. It seems funny to think that they could be having a chat on the way up, split off so that they walk through their respective doors then meet up again after walking through both sets of arches and attempt to carry on the conversation. “See you in 10”.

We also popped to the ancient hutongs, which was listed as “Old Peking’s fast-disappearing labyrinth of narrow alleyways”. I felt awkward taking photos here as it basically just looked like homes that had suffered the test of time where people had been banding together to tidy things up a bit over the years – cement over the walls to smooth them over, filling in smashed areas, things like that.

In actual fact, this was apparently a ludicrously expensive place to be due to the location. The people living there didn’t appear rich by any stretch; their properties had been passed down through the generations. To purchase a place there apparently was around 240,000 Yuan per metre squared. So a 60m2 property would cost 14,400,000 Yuan (around £1.7m / $2.3m). I caught a quick snap of something that I found funny though.

Not sure what’s going on with this chair’s security

Due to the traffic there was a bit of a shuffle-round with the original plans so this day turned out pretty jam-packed full of events.

After the quick tour stop it was on to the tea tasting. The person demonstrating had very good English (though this no doubt helps with the sales pitches).

From the left (top to bottom) there is a packet containing a “cake” form on top of two circular “cake” forms of Pu-er tea. The next two lines are commercial packages for the different types of tea then the jars contain the same teas for tasting. The glass on the end is a PP Boy, which I’ll get on to further down. Lastly there were several glass jugs so that the water/tea could be cooled down. The tray that they sat on had patters that went through the wood to allow the water to drain into a shallow tray underneath, which I found quite interesting.

The tall cups that you see are to sample the aroma of the tea. The Ginseng Oolong was the first tea to try, which was poured into the taller cups then the shallow cups were placed on top. This was left to sit for a minute or so then you invert the two and savour the aroma from the empty tall cup. Oddly, this was the only tea that use the taller cup.

About a minute or so after drinking the Ginseng Oolong my nose cleared up so that was a must for me – it’s done the same ever since too! Next up was Jasmine tea, which I was quite fond of. I’ve tried a variety of teas over the past few years that are not black teas and I’ve not got on well with them. These teas, however, I found quite pleasant.

The next tea was Litchi black tea, which tasted very much like lychee so Cresta was very happy. Next up was Pu-er tea, which comes in different ages and different forms (like the “cakes”). This has a load of health benefits according to the details that we were provided – lower high cholesterol and high blood pressure, lower sugar for diabetes and help to lose weight and detox. With a bit of honey, lemon or ginger it’s good for uric acid (gout) and arthritis.

Last on the list of teas was the fruit tea, which is very sweet. It appears to be made from crystallised fruit and a bit of tea, the fruit of which you can eat afterwards. As it’s also recommended for ice tea in summer I think that will be devoured by Cresta in the warmer months.

For the PP boy you pop it in hot water for a few minutes, take it out and soak it in cold water. When you then pour boiling water on its head it pees water. You then pop it back in cold water. This is a remarkable little thing, which was included for free for every purchase. After trying it out I found that it actually has a fair amount of water left over in its head (which takes a long time to get out when you want to pack it after playing with it in the hotel).

Next on the list for today was a trip to the Bird’s Nest (I.e.: where the 2008 Beijing Olympics were held). When we arrived we were left free time to go explore so this write-up isn’t very eventful. We spent part of the time browsing through the souvenir shop.

Last but by no means least on the agenda for today was the traditional Peking duck dinner. I’m not usually fond of duck but as it was the real deal I had to have a go. They didn’t carve it up in front of us as the tour guides had initially expected but it was enjoyable nonetheless.